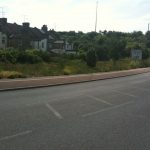 The River Ebbsfleet is an ancient river, flowing into the Thames at Northfleet Harbour.  Worshipped by the Celts and used by the Romans, the river was a firm fixture of life in Northfleet.  The crossing over it is remembered in the name of Stonebridge Road.  Current maps show the river running close to Ebbsfleet International Station, before it disappears, reappearing as Robin’s Creek at Northfleet Harbour.

The river is, though, still in existence, just hidden under roads in a process known a 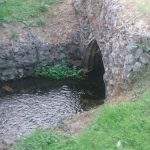 s culverting, when rivers in the way of developments were hidden away.

Now, however, there is a movement of deculverting, or daylighting, bringing our rivers back for the use of the community, to make localities more attractive, and to encourage greater wildlife and biodiversity.  We feel that the River Ebbsfleet would be perfect for this.

We aim to start with the section on Thames Way close to where it joins Stonebridge Road.  The section is under the grass laid behind the houses, between the railway bridge and roundabout.  Over the coming months we will be contacting local decision makers with the aim of undertaking a feasibility study on how this might be achieved. 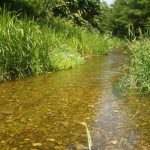 How the chalk bed river could look

This scheme is one of the aspirations of the Northfleet Harbour Restoration Trust, who aim to see the river opened up to community access, as well as providing an opportunity to develop biodiversity within the Northfleet area, leading to a range of potential wildlife habitats.