History of the River 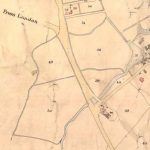 The river, originally known as the Fleet, but by the 1900s as the River Ebbsfleet, has been of significance since early history, when the river was sacred to the Celtic people.

At the source of the river, a series of eight springs, was the Roman settlement Vagniaci, and the settlers used the river as a link from the old Roman road of Watling Street (which is now the A2) to the Thames.  The settlement incorporated a waterfront feature, demonstrating the use of the river within their every day life.

The Anglo Saxons recorded the name as alternately Ypwines Fleot or Heopwines Floet, and a water mill of this era was found beside the river in its silt during the contruction of Ebbsfleet International station. 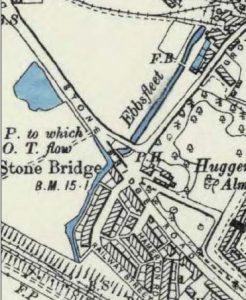 Throughout history, at the harbour end by the Thames, boats would anchor, and this is the location of the Northfleet Harbour Restoration Trust.

By the middle ages, pilgrims to Canterbury would stop at the stream, and a bridge is recorded as being in place by 1451. This was replaced in 1634 by a stone bridge, and it is this which is recorded within the name “Stonebridge Road”, and it is close to this which we seek to uncover.  On 1st June 1648, this was the site of a fight between 400 Parliamentarians and 600 Royalists in the English Civil War.  The Parliamentarians won. 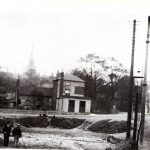 Years after this, a second brick built bridge was constructed alongside the stone bridge, and in 1775 a sheep wash was placed between the two bridges.  This had ceased to be used in the mid-1800s, and was simply called the Plough Pond by locals (with the Plough public house being opposite it).  At the end of the 19th century, the pond was filled and covered over, and the river was diverted under the road.  The field on the opposite side of the road from the football ground (now Ebbsfleet FC) was known as Plough Marsh, but despite being considered an attractive view in the 1840s, this was also infilled by the 1890s after turning into a muddy area. 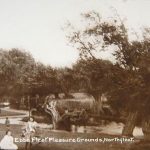 In 1808, William Bradbery, an entrepreneur, began to cultivate watercress at the source of the river – Springhead – becoming the first person in the country to cultivate watercress commercially.  Bringing small plants, he was able to ensure the watercress took across the whole area of river near the springs.  After he moved on, the spring end of the river continued to flourish, and the river continued to flow in Ebbsfleet Pleasure Gardens into the 1930s.  This space, however became dried up and polluted due to local industry, and popularity began to dwindle.

The Pleasure Gardens were lost to make way for the goods line between to the south of Northfleet station.  Much of the river was finally culverted to make way for the road developments which were necessitated by the creation of Ebbsfleet International station.  Some sections are still visible, but are difficult to access by the public in most spaces.

However, we believe that the river could once again become an attractive asset for the Northfleet area, flowing alongside the roads.